How to Run for Office: What’s Your Message

These are all terms you may have heard before that will help you create your message in your attempt to connect with your voters and fellow citizens.

You’ve got wonderful reasons for running. You’ve got passion. You’ve got amazing qualifications. You’ve developed complex opinions about the issues that face your area.

But you shouldn’t overwhelm folks by sharing all of that with them every time you engage voters.

You need to create a simple, clear, and concise message in order for voters to receive and process it.

One way of doing creating your campaign message is the tried and true message box method.

Start on the left side, using your own perspective.

If you don’t have an opponent yet, imagine the toughest (or most likely) opponent you could face. If you have multiple opponents, you should create a message box for each of them, or at least the most serious one(s) of the group.

Filling out the right side can be difficult. You’ll need to use your imagination and be honest to think about yourself from the “other side.” But being critical and thoughtful here will help you write a better message for your campaign that highlights the differences between you two — and why you’re the better choice.

Below is an example of a completed message box about Superman vs Lex Luthor.

Feel free to practice with two of your fave characters. 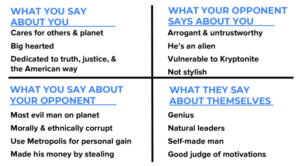 Now that you’ve considered yourself and the voters’ choice from multiple angles, you are in a good position to refine your campaign message. (Remember, you want to be concise — you probably shouldn’t include everything you’ve listed.)

In case some inspiration would be helpful, here are a couple examples of solid campaign messages from other candidates:

President Barack Obama, as a candidate for President of the United States in 2008

Senator Tammy Duckworth, as a candidate for U.S. Senate representing Illinois in 2016

Your message should contrast you with your opponent. It doesn’t have to be explicit though: Consider including an issue or part of your background that distinguishes the two of you. Bring up the differences, but let the listener make the connection.

For example, if you’re running for School Board, do your kids attend the local public schools but your opponent’s children attend private school? Consider referencing your experience as a parent of public school children. Or if you support building a controversial new recreation center in the underserved part of town where many of your target voters live and your opponent voted against it, that might be appropriate to include in your message.

This message box is going to help you refine your message for your website, social media, campaign lit, stump speech, and even your fundraising pitches.